How To Make An Impact With A Stand-out Feature Image

Humans are visual creatures. In fact, 90% of information transmitted to the brain is visual.

So sure, words are great - especially those that pack a punch and hit hard between the eyes. But you could do more to captivate your audience!

A picture paints a thousand words

Second to your headline, your blog post’s featured image is the thing that your readers are going to see first. It needs to grab attention, spark curiosity and generate emotion..

The human brain can process images 60,000 times faster than text.

Think of your featured image as the garnish to the intricate meal you’ve slaved away over for the last 12 hours. The last little drizzle of olive oil, the decorative sprinkle of fresh mint leaves, the final pinch of fiery paprika…

Yes, it’s going to taste amazing either way - drizzle, sprinkle, pinch or not.

But is it going to look as appealing?

Is it going to get people talking?

It is going to intrigue those settling down to their third microwavable meal of the week?

Is it going to make an impact on Instagram? (Because, if you don’t Instagram your food, did you really even eat?)

My point is, a blog’s featured image sets the scene and determines the tone of your content.

Your hero image is going to appear the top of the page before any text. And it’s also the image most likely to be pulled through when shared on social networks. It’s the reader’s first impression of your blog.

37% of marketers said visual marketing was the most important form of content for their business, second only to blogging (38%) - Social Media Examiner

If you’re still not convinced about the growing importance of visuals in your content marketing, just look at the rise of social media platforms like Instagram and Pinterest. Built and thriving because of humans’ love for visuals...

In the words of Rod Stewart, every picture tells a story. And we all understand the importance of a good story in content marketing...

There are two distinct contexts for feature images:

Ultimately - whichever option you go for - it needs to compliment the headline and the tone and goal of the blog post.

Note the word compliment… don’t get bogged down trying to find an exact visual representation of your headline.

Our latest blogging guide is called Blog, Sweat and Tears - but that doesn’t mean we searched high and low for an image of someone blogging in a pool of their own sweat and tears. (Although that would certainly attract some attention!)

The connection between the two only has to be subtle.

If the two don’t relate, your audience will have no idea about what they’re being asked to read. And they’re less likely to want to share that with their networks if that’s the case. Don’t risk misleading the reader or you could lose them forever.

So, keep four things in mind:

Putting the time in and doing some digging on stock sites such as iStock and Shutterstock will pay off. And you’ll have an abundance of quality visuals worth sharing.

You get the picture, right?

The feature image of your blog is just as important as the content itself. If it’s not exciting, or remarkable, or god damn bloody relevant it’s not going to attract any valuable attention. And then that’s it - you’ve just wasted your time writing an amazing piece of content for no reason.

So take your time, do some digging, and entice your audience with a compelling hero image.

For more practical and honest advice on meaningful B2B blogging, download our free 43-page eBook below. You know you want to... 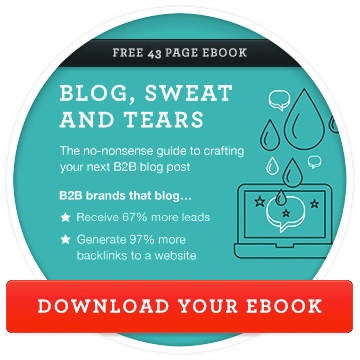 Beth is one of our Content Marketing Executives - involved with delivering meaningful inbound marketing campaigns. As well as creating compelling content, she is outreach and social media savvy.

Sign up to get a monthly digest of our latest posts. We share our ideas and expertise on content marketing and making your work life more meaningful.
An error occurred processing your form. Please check your values and resubmit.

We love to share and engage with people just like you. So come and connect with us in any of these social places